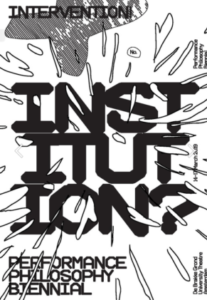 Taboos, contradictions and double binds of being an academic philosopher and how philosophers try to deal with them

This lecture performance is based on 30 confidential interviews with academic philosophers in Germany (professors, junior faculty, and students) on their reading habits and professional life. One aspect of these interviews that struck me in particular and will be my focus here, is that several of the interviewees told me that that some of their most central convictions in philosophy and certain points of view regarding their working life at the university they had harboured for years but would never reveal openly in their professional environment. While some people were very aware of this contradiction between what they think and what they are prepared to say openly, others were only partly conscious of it. In both cases it was apparent that these contradictions made them discontent or sad or somewhat crazy and it made them deduct or dream up a range of explanations about what is wrong with academic philosophy. In the end, it made them develop different – often very personal – ways out of this contradiction. In this lecture performance I want to name some of the beliefs, taboos and double binds that seem to reside within philosophy departments, make assumptions how they arise and describe how academics try to deal with them.